“I’ve always been attracted to the Arctic and Antarctic. These are places where very few people want to go.”

On the 4th of August 2002, Mike Horn boards his 10-meter trimaran (sailing boat) at Nordkapp (North Cape) in Norway and sails west to Greenland via the Norwegian and Greenland seas. He touches the east coast of Greenland 13 days later, to tackle the second stage of his expedition: the overland crossing of Greenland from east to west. In the meantime, Mike’s logistics team convoys his trimaran to the west coast of Greenland, where he will start the next phase of his expedition. On Tuesday, the 27th of August, he begins his traverse on skis, pulling a 110kg sled in which he carries sufficient food and supplies for 30 days. The power of the wind gives him the opportunity to speed up his traverse by using kites for faster traction over larger distances. This method allows him to cover an average of 60km per day – his record being 143km. 18 days and over 1000km later, he reaches the west coast of Greenland on the 13th of September, where he finds his boat waiting for him to tackle the following stage of his journey around the world.

He jumps onboard his trimaran, sails across Baffin Bay and into the Canadian Northwest Passage. On the 30thof September, he drops off his sailboat in Nanisivik, a small Canadian mining town on the north coast of Baffin Island. From there on, Mike has to pursue his adventure overland in order to follow the imaginary line of the Arctic Circle as closely as possible, adding an extra 1200km to his overall journey. This step consists of crossing Canada’s Northwest Territories on foot and on skis, but due to thin ice conditions, the departure is delayed. Mike has no choice but to wait several weeks for the conditions to change. When the time feels right, Mike finally begins his trek, but after 5 days of walking he decides to turn back due to the dangerous amount of open water stretches caused by warm weather. He therefore returns to Arctic Bay on the southern coast of Baffin Island and waits a little longer. Nearly two months later, on the 26th of November, the ice-cover finally thickens enough for Mike pursue with his overland traverse.

Shortly after the start of the new year, on the 10th of January, Mike accidentally sets his tent on fire when changing his stove’s fuel bottle. He miraculously manages to save his sleeping bag, satellite phone and GPS and was able to call his team for help. Caught in the middle of nowhere in -30 degrees Celsius wearing nothing more than his thermal underwear, Mike builds an igloo to shelter himself while waiting for help. The coldest temperature he encountered during his crossing was -62 degrees Celsius.

On the 28th of February 2003, three months after he left the east coast of Canada, Mike finally arrives on the west coast of the Simpson Peninsula in mainland Canada. Despite a 3000km detour, a couple hiccups and numerous delays, Mike never loses sight of his west coast goal. For the next step of his adventure, he then follows Canada’s north-west coast and swaps his sled for a kayak in order to row across the Mackenzie Strait. Again, the conditions he encounters were not in his favor, resulting in having to pull his kayak like a sled due to the lack of water. Mike finally reaches the Alaskan border on the 29th of June 2003.

On the 13th of August, just over a year after starting his Arktos expedition, Mike arrives in the town of Point Hope, in the far west of Alaska and north of the Bering Strait. There, he meets up with his wife and daughters for a short get-together before embarking on the next stage of his journey. A couple days later, he bids his farewells, boards his trimaran and sails off into the Chukchi sea towards Siberia.

At this point in the expedition, Mike is making considerable progress despite the delays incurred by nature during his time in Canada. Little does he know however, that different delays will be awaiting him in Siberia; this time not due to nature but due to men’s power. Mike thus finds himself obliged to make a 600km detour southwards during his sailing traverse to enter Russia via a town named Provideniya; Provideniya being the only port of entry for foreign boats on the east coast of Siberia. But that’s not it, Russian authorities then deny Mike entry into the territory, forcing him to acquire a visa giving him the permission to cross the region on Chukotka. The wait for the visa will end up lasting three months, which Mike decides to spend in Alaska; his family joins him again and they move to a cabin in the woods and live off nature. On the 25th of November, after Mike finally receives the necessary authorizations, he leaves Alaska and sails off to Siberia.

Once arrived on land, he follows the Bering Strait and heads back up north to remain in close range to the Arctic Circle. He then heads west to complete the remaining 10’000km left of his adventure. By this time, Mike has almost reached the halfway mark of his circumnavigation.

On the 29th March, after a 3000km overland journey on foot through the challenging terrains of the Siberian tundra, Mike arrives in the town of Chokhurda. There, the villagers give him a friendly welcome and help him repair his equipment and acquire the necessary supplies to pursue his route to Tiksi, followed by Khatanga and Norilsk.

From Norilsk onwards, Mike’s original plan is to swap his walking shoes for his kayak, but due to the late arrival of spring that year, he opts for his skis, kite and 160kg sled instead. One month later than expected, on the 12th of July, the ice finally melts enough for Mike to continue his journey via kayak. A few days later, on the 16th of July, Mike celebrates his 38th birthday on the Messoyakha River. He has so far covered 18’000km since his departure 22 months earlier.

August 2004, following the crossing of the Obskaya Guba (the Golf of Ob), Mike reaches the Arctic Ocean at the coastal town of Topseda. There, his trimaran convoyed by his logistics team awaits him. On the 9th of September, Mike plans to sail out to pursue his adventure, but a storm causes significant damage to his trimaran. He has no choice but to pause his expedition in order to make the necessary repairs to the hull of his boat, postponing his departure for the Barents Sea until the 29th of September.

Just under a month of sailing later, on the 19th of October, Mike decides to continue his journey to Murmansk by land using a bike rather than by sea after having encountered new difficulties with his trimaran. He cycles about 300km west towards Norway before being able to jump onboard his boat again.

On the 23rd of October 2004, Mike reaches Nordkaap (The North Cape), closing the loop of his Arctic Circle circumnavigation and his Arktos Expedition. From start to finish, his adventure takes him 808 days, the equivalent of 2 years and 3 months to cover a total distance of 26’000km; making him the first man to undertake a feat of this kind without any means of locomotion. During his quest, he sets a world record by crossing Greenland in 15 days and 8 hours, and also becomes the first man to cross the Northwest Passage in Baffin Island by foot, as well as the first man to ever cross the length of Siberia in solitude and in temperatures reaching -60 degrees Celsius.

Mike Horn’s Arktos Expedition was a circumnavigation of the globe which took place in 9 stages over 2 year and 3 months. The stages were the following: 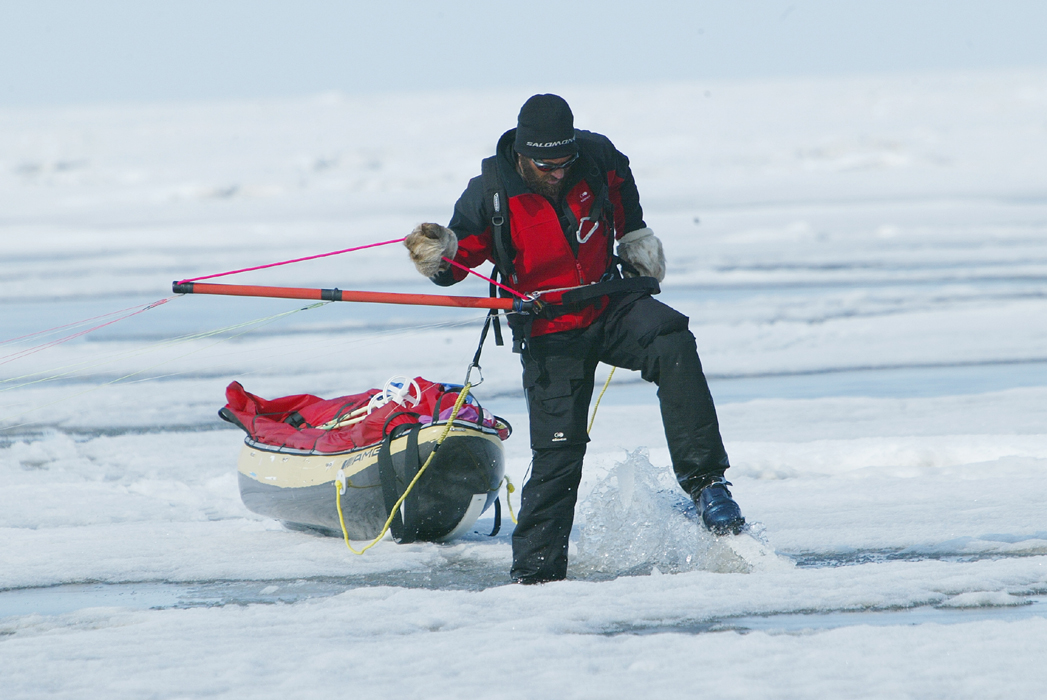 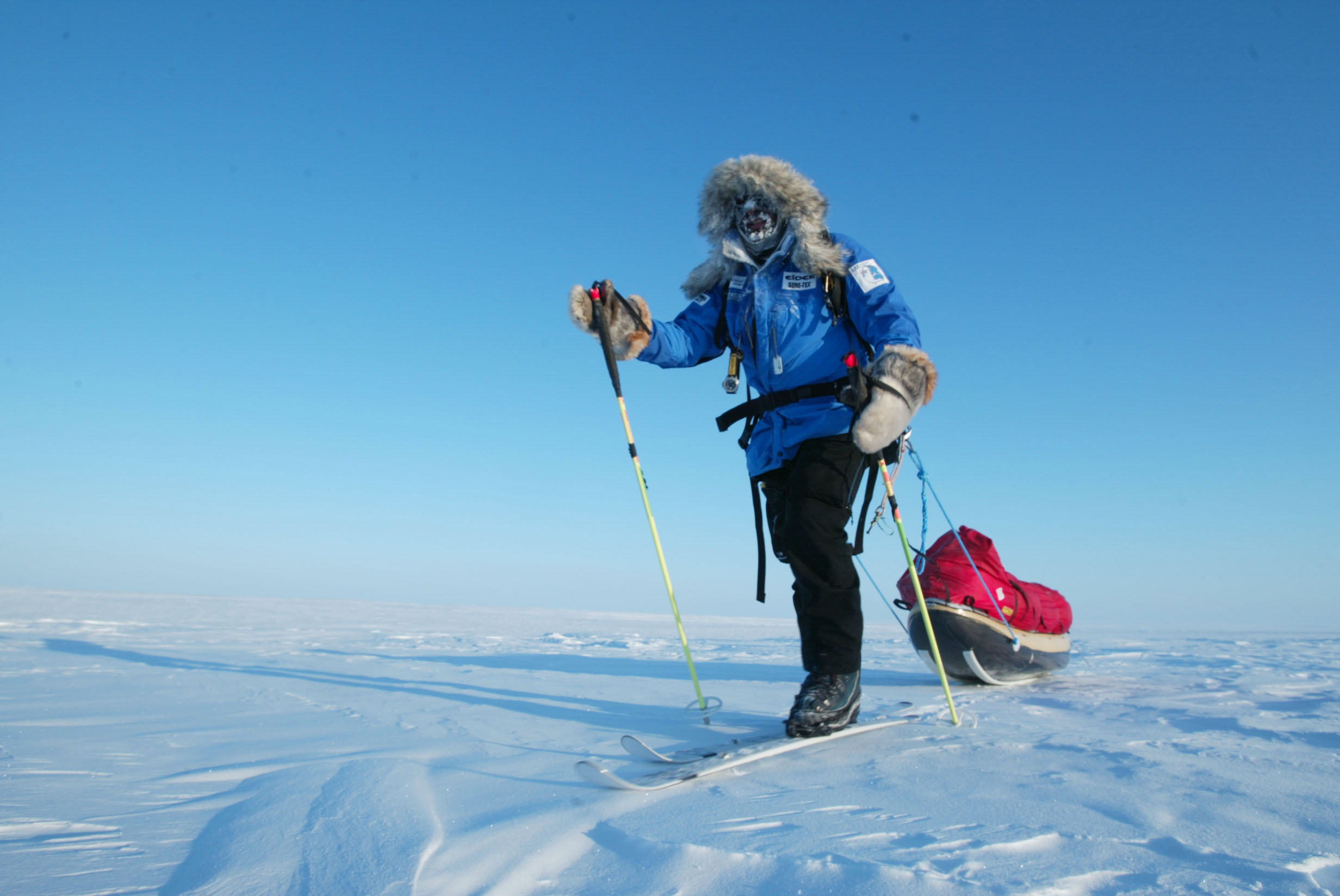 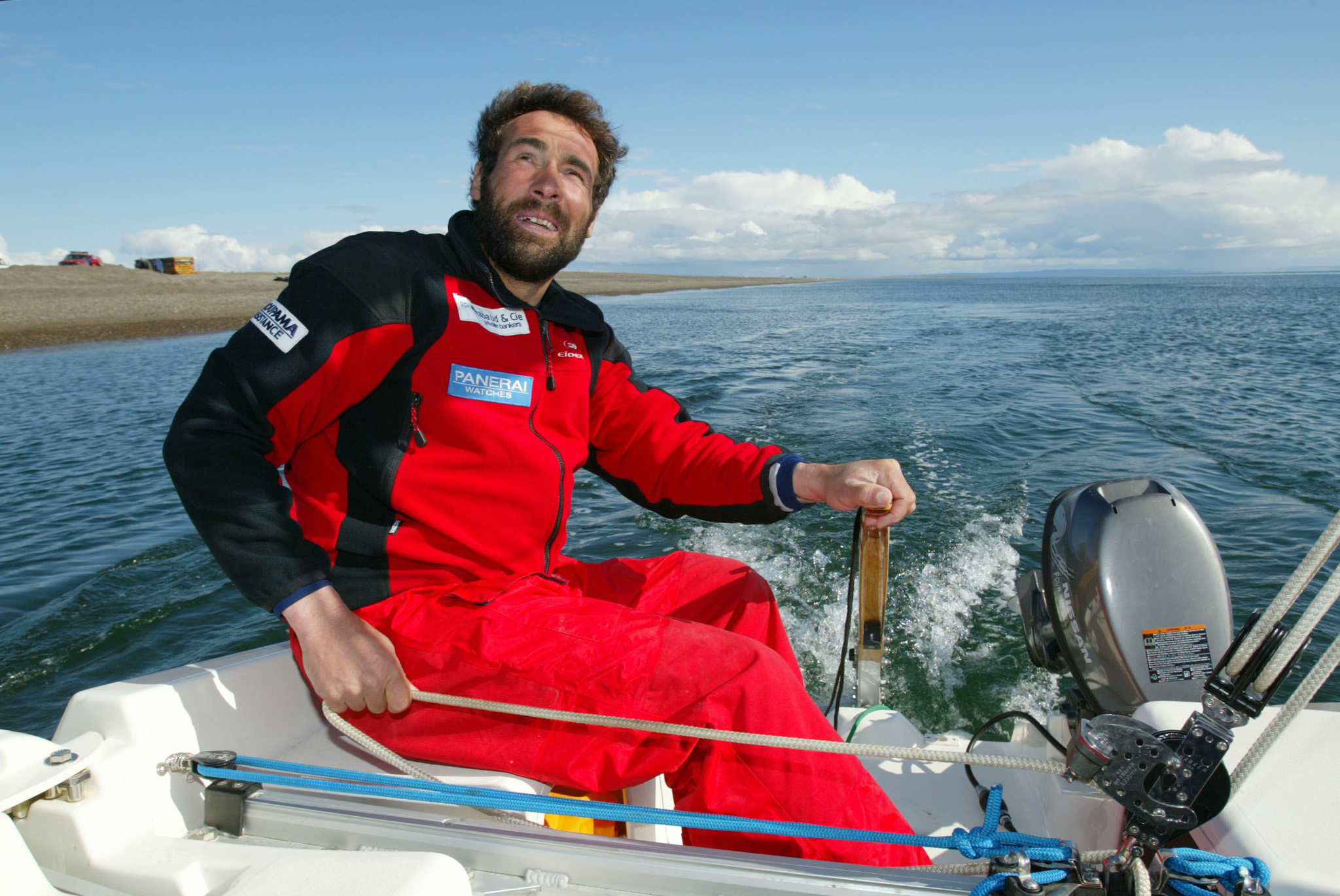 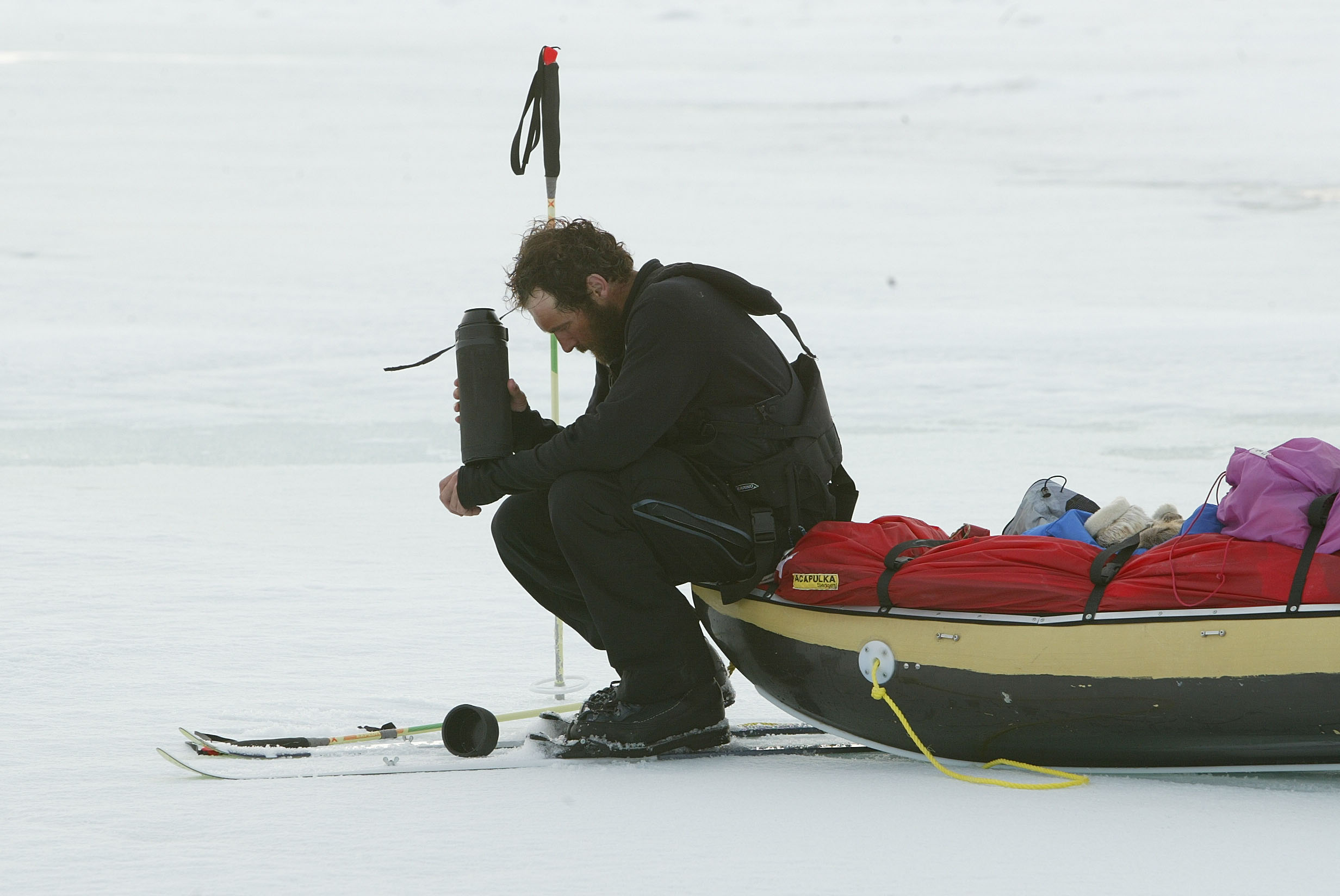 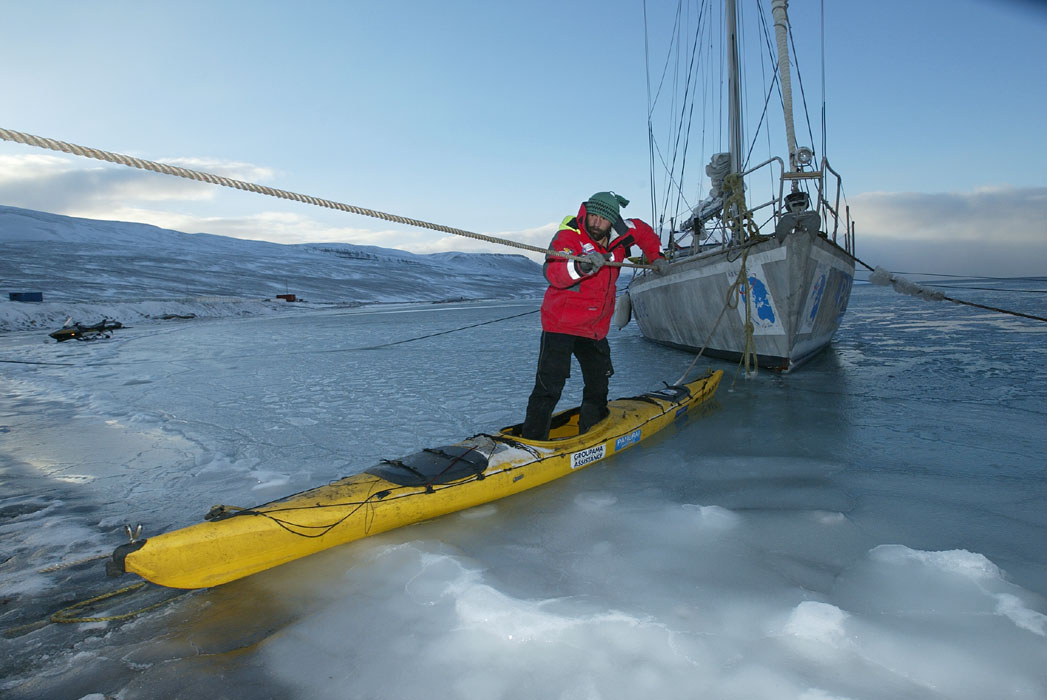 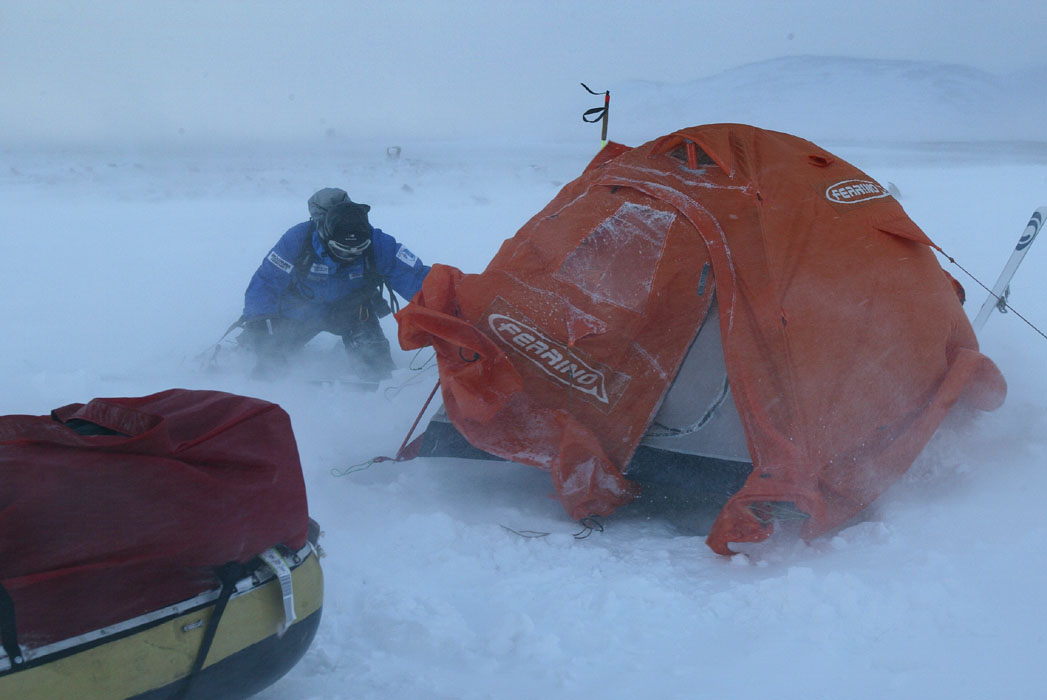